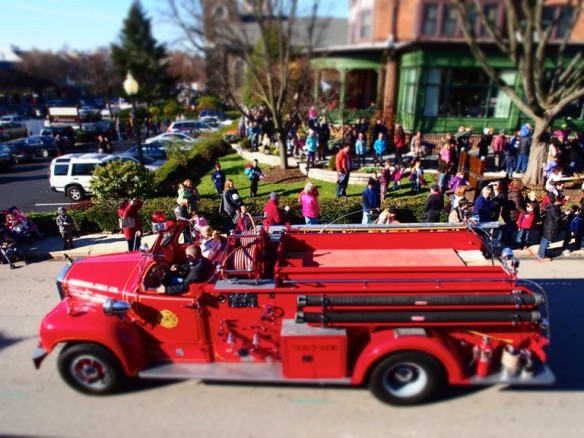 Friends and neighbors of all ages turned out Friday night to kick-off Wayne Hotel’s Old Fashioned Christmas in the heart of Wayne. The mild weather drew record crowds to the holiday tradition, and they participated in the array of festive activities leading up to the 19th annual lighting of the Wayne Christmas tree.

The affair officially kicked off at 5:30, with carolers strolling down North Wayne Avenue stopping by and spreading holiday cheer.  Horse-drawn carriages awaited on South Wayne Avenue to give families a tour of the neighborhood that participated in the 2011 house- decorating competition. Afterwards, kids joined together at the Radnor Fire House to decorate ornaments and get their faces painted. The ever-present Toy Solider greeted the children throughout the town. As seven o’clock approached, families began to move toward the Wayne Train Station, where the Valley Forge Military Academy Chorale sang Christmas carols in front of the Christmas tree. Radnor High School Cheerleaders donned reindeer antlers and performed seasonal cheers for the anxious crowd before the lighting of the tree. As the big moment approached, Santa appeared in a surprise drive-by on a Radnor Fire truck reminding the kids to visit him the following day at the Wayne Hotel. This year’s countdown was led by Vernon Odom of Channel 6 Action News along with David Brennan, General Manager of Wayne Hotel and Diane Jiorle, President of Wayne Business Association …5-4-3-2-1 and the tree illuminated the town of Wayne.

Saturday morning, families lined up on along Lancaster Avenue for the start of the annual Santa Parade. The parade featured Radnor High School’s Marching Band & Cheerleaders, Valley Forge Military Academy Field Music Group and Santa travelling in style high atop a gleaming fire truck. Also riding on the truck with Santa was Marine Staff Sergeant R. J. Wilson, his wife and two daughters. The parade ended at the Wayne Hotel, where Santa visited with families on the Veranda. Paramour restaurant provided delicious complimentary house-made holiday cookies and hot chocolate for everyone to enjoy.

And so I’m offering this simple phrase, To kids from one to ninety-two,
Although it’s been said many times, many ways, A very Merry Christmas to you.